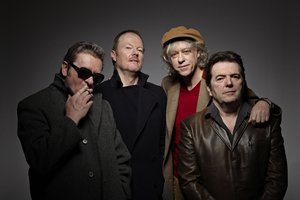 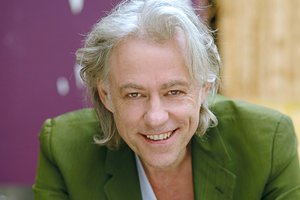 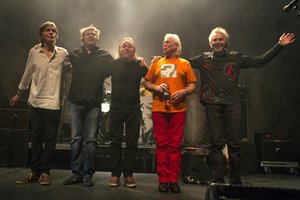 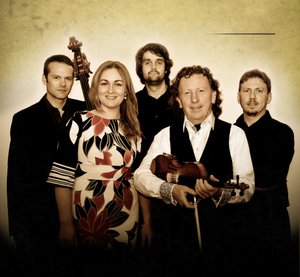 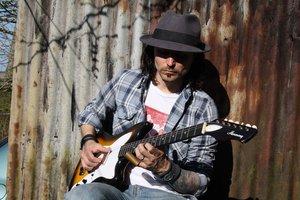 Frankie Gavin has been playing fiddle and flute since his teenage years. At the age of seventeen, he won two All Ireland competitions – for fiddle and flute. Originally influenced by some of the great Irish and American-Irish fiddle players, James Morrison, and Michael Coleman, he later found himself playing with stars such as The Rolling Stones, Stephane Grappelli, Elvis Costello, Earl Scruggs and Yehudi Menhuin as well as with some of the great contemporary players and singers of traditional Irish music. All have left their mark on his eclectic approach to music.

The name Frankie Gavin is also synonymous with De Dannan the globally renowned band he founded in the mid-1970s. After a short break in the early 2000s, Frankie restarted the band with a new young line-up. The current incarnation maintains the super-stellar quality of those iconic early De Dannans.

In his time, Gavin has played for four American presidents, starting, as a seven-year old, when he played for John F. Kennedy on his 1962visit to Ireland, for Presidents Clinton and Bush and, most recently, for Barack and Michelle Obama when the president visited his ancestral home in the village Moneygall in County Offaly. The plain fact is that there is no more exciting fiddle player or moving flute player in the world of Irish music today.

Irish music today is a global brand. Millions around the world can recognize a fierce, rip-roaring set of traditional jigs or reels when they hear it. But Frankie Gavin and De Dannan bring something different and unique to today’s audiences. Sure, they play furious jigs and reels – it’s always been one of the band’s trademarks, but their music now has other very special qualities. Their choice of material, arrangements and style of playing combine powerfully to set traditional Irish music in a wider cultural context. What other line-up infuses this inherited music with such a wide range of influences – from gypsy jazz to contemporary pop music, and from mainstream European classical music, to sentimental Irish-American ballads? The band’s latest recordings, the CD Jigs and Jazz II (2013) and their 2014 single, which pairs Handel’s The Queen Of Sheba with Paul Mc Cartney’s Calico Skies, are perfect illustrations of the fusion of sounds and influences you will hear at a live gig. It is this special blend which enables Frankie Gavin and De Dannan to thrill audiences wherever they perform – from Sochi Music Festival before the Winter Olympics to a state dinner for President Micheal D. Higgins, and not forgetting their several White House performances for American presidents, all the while maintaining close contact with their roots: many of the band’s home gigs are in bars, hotels and theatres across Ireland.

By any standard, theirs is a remarkable achievement, made possible by the genius and vision of Frankie Gavin himself and by the commitment and musical skill of each member of the band.

Experiencing this twenty-first century line-up live will change your view of Irish music. It may even change your life!

Troy Redfern grew up in the Welsh borders in the shadow of Hergest Ridge, made famous by Mike Oldfield, and began playing guitar at the age of twelve after watching Back to the Future with it's infamous over the top Johnny B Goode scene. As Troy's playing developed he began exploring open tunings and was soon turned on to the slide guitar of Son House and Hound Dog Taylor, as well as the works of Zappa and Beefheart and their alumni. He spent much of his musical formative years playing, writing and performing with Ten Years After’s Joe Gooch, both being from the small border town of Kington in Herefordshire.

In 2008, Troy put together his own studio and began exploring production, writing everything from straight ahead blues, to avant garde and progressive roots. Out of this material came the two digital albums ‘Werewolf Etiquette’ and ‘Playing with fire’.

Early in 2013, Troy decided to put together a band under his own name to play these newly written songs. The logical choice when recruiting a bass player was Killing Floor’s Stuart McDonald as Stuart and Troy had played together in various projects over the years, and had a great musical connection rooted in the heart of the blues. Stuart has a long history with the blues having played bass for the blues legend Freddy King on his first UK tour, as well as supporting Muddy Waters. Stuart also played bass in Paul Rodgers’ post-Free band, Peace, and the infamous London blues outfit, Salt.

Drum duties were given to Alex Bridge. Originally from the Welsh borders, Alex was now living in Oxfordshire and studying with world renowned drum teacher Bob Armstrong (a legend within the UK drum community having taught many of the UK’s finest drummers). A fantastic swing drummer, Alex’s dedication to feel, expression and detail underpin the trio’s performance and delivery.

The Troy Redfern Band began playing live in late 2013, and quickly gained accolades from the likes of world class producers Jim Eliot (Ellie Goulding, Paul Oakenfold) and Charlie Francis (REM, Gravel Tones) after playing at the prestigious Telegraph Hay Festival. The positive reviews came thick and fast from the UK blues press and the likes of UK's top promoter Pete Feenstra who said 'The protean slide guitarist leads his power trio with style, gusto and virtuoso playing that fuses spontaneity with real craft. Redfern combines the rawness of Hound Dog Taylor, the freeform approach of Sonny Sharrock, the firebrand playing of Johnny Winter and the technique of Dave Hole with the ghost of Elmore James'.

Bassist Stuart McDonald says of Troy, ‘I’ve played with some of the finest guitar players, but Troy is one of the most intense, expressive and passionate guitarists I’ve ever played with. You need to check him out!’

The Boomtown Rats were an Irish rock band that scored a series of British hits between 1977 and 1980, lead by the singer Bob Geldof, who organized Band Aid and Live Aid.

They were originally from Dublin. In 1975 Bob Geldof, Jonnie Fingers, Gerry Cott, Pete Birquette, Gerry Roberts and Simon Crowe came together and started Boomtown Rats. In 1977 they released their first single “Lookin` After no. 1”.

In September 1977 they released their first album “Boomtown Rats”. Their second album “Tonic for the Troops” was released in 1978. The album included “Like Clockwork” became a hit at the UK charts.

In 1979 they released “The Fine Art of Surfacing” with “I Don`t Like Mondays”, the single became a smash hit world-wide, reaching No. 1 spot in 32 countries and became an all-time classic. The album also included another top hit in the UK charts “Someone`s Looking at you”

The band released “Banana Republic” their final UK top then hit in 1980. The single was part off their next album “Mondo Bongo”. Their next album “V Deep” was released in 1982, without the guitarist Gerry Cott who left the band.

March 1983 Columbia released the six-song compilation “Ratrospective». Their last album was “In the Long Grass» in 1984. In 1985 Bob Geldof organized the star-studded Band Aid held on July 13, 1985, in London and Philadelphia, resulting Bob Geldof and Midge Ure who wrote "Do They Know It's Christmas?" resulting in the biggest selling single in U.K. history. The group folded in 1986, and Bob Geldof launched a solo career.

Now Boomtown Rats is back touring all over Europe, with Bob Geldof on vocal, Simon Crowe on drums, Garry Roberts on guitar, and Pete Briquette on bass, Alan Dunn on keyboards and Darren Beale on guitar.

Bob Geldof an Irish singer/songwriter, once part off the legendary Irish band Boomtown Rats. Beside from being the leading figure in the band, he starring at Alan Parker movie “The Wall”, based on Pink Floyd album. He asserted himself early as a strong and articulate personality, and was engaged in poverty in Africa. In 1985 he started Live Aid a music event both in UK, USA, Australia and Russia, and Live 8 Aid in 2005. Because off his engagement off the hunger disaster in Africa, he was appointed an honorary knighthood by Queen Elizabeth II.

In 1986 he wrote his autobiography “Is That It?,” and the same year he released his first solo album @ Deep In the Heart Of Nowhere”. The next years he been less active as an artist, but he was able to release Vegetarians of Love (1990), The Happy Club (1992), Sex, Age And Death(2001) and How To Compose Popular Songs That Will Sell (2011). As a solo artist he has released two greatest hits: This Is The World Calling (1986) and The Great Song Of Indifference (1990).

He continue to be an engages spokesman for the struggle for hunger and poverty, specially in Africa. Both in 1989 and 2004 then released the single “Do They Know It's Christmas?” then most off the major British artists, and they collected a lot off money for helping the poverty in Africa.

Bob Geldof have his own touring band and he love touring all over Europe. Along his stage side is Pete Briquette, bass - Alan Dunn, piano and accordion - Bob Loveday, fiddle - John Turnbull, gitar - Niall Power, percussion and synth - Jim Russel, drums.

Junipher Greene released their first album «Friendship» in 1971, and has been sorted out as the most important Norwegian album ever released. It was the first double album released by a Norwegian band and the cover was illustrated by the Norwegian artist Odd Nerdrum.

This was in the early -70, but it really started in 1965 as a blues band with Helge Grøslie on organ,vocal, Øvind Vilbo on bass, Freddy Dahl on guitar, vocal, Bent Åserud on guitar, flute, harmonica and Geir Bøhren on drums. The band changes the musical direction into progrock. Progrock was a new expression off music and other bands like Pink Floyd and King Grimson made the music style popular all over the world. When they released “Friendship” the album became best seller. Now the band regularly performed at Club 7, one off the most legendary clubs in Oslo, and they got the opportunity to being billed one off the first outdoors festivals in Norway. At “St. Hanshaugen” 1. of may 1970 they performed the entire “Friendship” album before a major audience. Then they got invited at the “Kalvøya” festival and toured all over Norway. It resulted in several radio and TV shows and a program was devoted entirely at the “Friendship” album. They was invited to tour Poland and the last concert in Poland was at the Culturepalace in Warsaw. In 1973 they released their next album "Communication". They now decide to do a month tour at the Ivory Coast, Africa.

After a break off many years the decided to do a reunion concert in 2008. They was invited back to do concerts at Norwegian venues, and are now back with the same lineup as the “Friendship” lineup, with an exception off Helge Grøslie who was replaced by Jon Willy Rydningen. They really looking forward to tour all over Norway and looking ahead for Europe.

The band is just at their peek now as they was in the early -70.